Tales of Kintail and the Five Sisters

Posted on March 6, 2016 by greenmackenzie 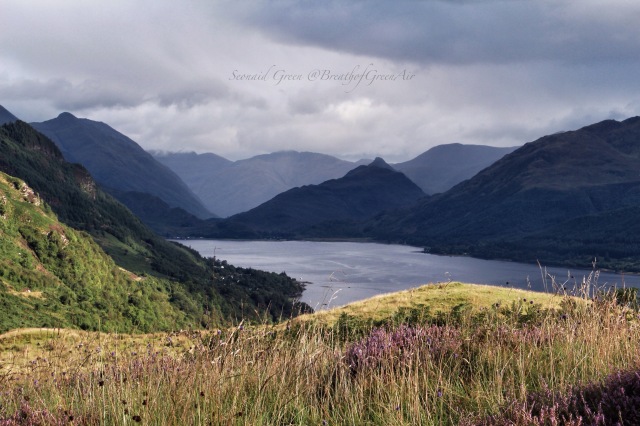 Follow me north and west in Scotland, through the Cairngorms and past Ben Nevis, and we will pass through Glen Shiel and onwards into the Land of the Three Sea Lochs. This is a boarder land which has been deeply contested for atleast the last 1,600 years. Watched over by the magestic Five Sisters of Kintail, the very earth here is steeped in myths, legends and history which swirl mist like with their echoes and whispers. The tales of this land have been woven from the clash and merge of atleast four cultures, each one rich and ancient in its own right. Within Glen Sheil the last battle fought on British mainland soil was settled, and the merger of the Scottish and English crowns was sealed for good. The mountains and rocks rang to guns, cannons and the cries of wounded and dying men, and their blood seeped into the heather clad soil. Spanish, Gaelic, lowland Scots and Angles and English soldiers clashed in the final climax of Bonnie Prince Charlie’s fight to claim his throne. The world shifted forever as a result of what happened in this seemingly remote Highland Glen in 1719. 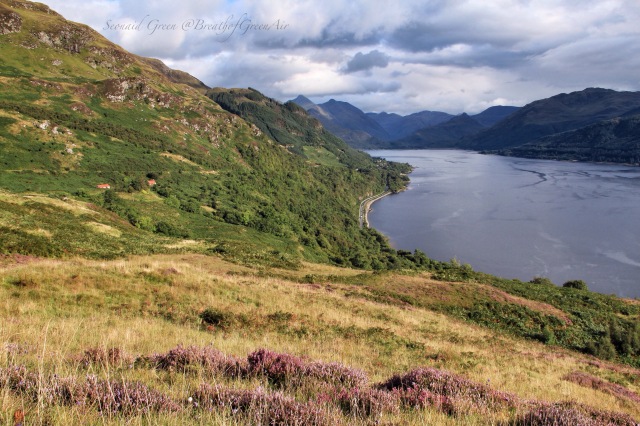 Away in the distance at the head of the salty waters of Loch Duich you can see the blue-black silhouettes of the beautiful five sisters of Kintail. There are a few different legends swirling around their slopes, and my favourite involves the deep spells of the Grey Magician of Coire Dhunnid, who promised their aging father the King of Kintail, to preserve the beauty of the 5 sisters forever. These mountainous maidens have been waiting for thousands of years for their princely lovers to return and sweep them away into marital bliss. Being cast of stone their beauty is now eternal, they are immortal and blessed with marvelous gifts for all humanity. Like the Tibetan 5 sisters of Longevity, these mountain goddesses each bear gifts for humanity. Running from Loch Duich back inland towards Clunie, the first sister Sgurr na Moraich is the smallest at just 876 meters, and her name means the Peak of the Sea Plain. A grain and milk goddess she watches over the grazing animals and crops in the fields at her feet. Sgurr nan Saighead (929), the Peak of Arrows, is more of an Amazon warrior, sitting fiercely behind her sister and guarding the pass as it flows through to the sea loch of Loch Duich, and onwards towards Loch Long, Loch Alsh and the Isle of Skye. The central tallest sister is the sacred peak of wells and springs, Sgurr Fhuaron (1067), often veiled in clouds and familiar to the Culdee St Oran, she promises healing and divination. Sgurr na Carnach (1002), the Peak of Cairns or stones, holds ancestral memories, and finally Sgurr na Ciste Duibhe (1027) lying deep into Glen Shiel, the Peak of the Black Chest is the most dangerous, holding the secrets of life and death. Tread carefully if you climb their sides.

These images are taken from in Iron Age hill fort which lies beside the old high road out of Kintail.  Looking eastwards along Loch Duish towards the 5 sisters and the pass of Glen Shiel, this has at times been the edge of the sea kingdom of Kintail, of Lochalsh, part of the kingship of the Lord of the Isles and the old clan lands of the MacKenzies.  A wild place full of fierce warriors and strong maidens.

(Sgurr is pronounced Skoor, and is applied to jagged steep peaks. It’s Gaelic roots are though to lie in the Norse word sguvr, which means cliff)

Hi, I'm Seonaid, and I share my home on the shores of Loch Ness deep in the Scottish Highlands with my husband, my son and a couple of dogs. I love art which is here now and gone tomorrow...like food and nature...but also have a passion for vintage and the ancient past! Nature is my favourite muse, with her wild ever shifting seasons. I have been using and teaching mindfulness and relaxation for over 12 years, and have yet to become any sort of expert :-) I'm a Psychotherapist and Cancer Support Specialist in Maggies Highlands
View all posts by greenmackenzie →
This entry was posted in ancient history, mythology, Plockton, Uncategorized and tagged 5 sisters, clan MacKenzie, Glen Shiel, Highlands, history, Kintail, legends, mountains, myths, scotland, travel. Bookmark the permalink.

61 Responses to Tales of Kintail and the Five Sisters