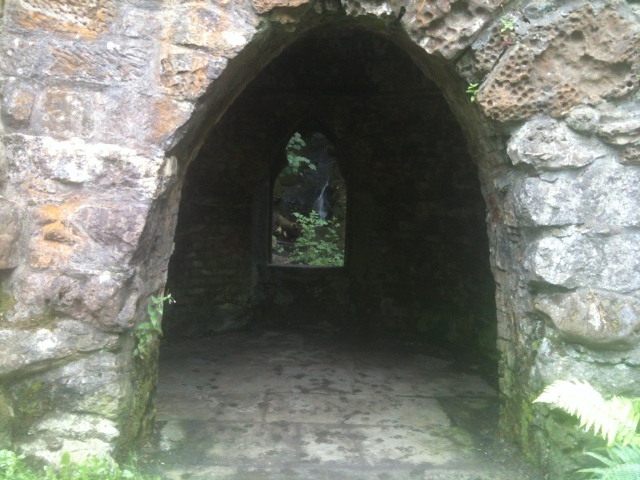 We stumbled across this old folly on an atmospheric walk through Colinton Dell, on the outskirts of Edinburgh, yesterday. There were bursts of warm sunlight interspersed with dramatic showers of rain, and we took shelter in the folly during one of the heavier showers.

We were deep in the gorge of the Water of Leith, close to its source in the Pentland Hills. The river itself was flowing fast, full of newly fallen rain. The surrounding woodland was bursting with lush foliage, head high ferns, ripening brambles and raspberries and soft green moss. The air was filled with the scent of newly damp earth, and the folly itself seemed to rise from the undergrowth cloaked in ferns and moss.

The atmosphere inside was hushed, and the dim light was speared with shafts of green light from its three curiously shaped windows. The largest window at the back opened its arch onto a view of a little waterfall tumbling down from a spring high above in the rocks of the gorge. The silver tinkling of the water was enchanting, and as I sat on a low stone sill in the shadowy folly I wondered who else had been in this space before me….

The ceiling had the remnants of what had once been a shell covered roof, and the windows had been robbed out of a much older building, perhaps even a church. The walls themselves included strange warped and holed rocks giving the whole an air of mystery…..which I suppose must have been its intent. The mysterious feel brought a playful smile to my lips, and this was how I stepped out of the folly back into the sunlight and the rest of my day.

Apparently the folly was built around 1830, in the grounds of Craiglockhart House, as a romantic grotto in the Moorish style. It was comissioned by the owner of the house, Professor Alexander Munro (1773-1859) who was a famous medic of his time. So there may well have been some playfulness in the follys past…

Colinton Dell itself has a much older history, with a prehistoric vitrified fort overlooking it from the top of Wester Craiglockhart Hill. This fort was re-occupied by the Romans during their time in the Lothians.

Colinton village has its footprints in the old packhorse roads which wound their way down to the ford which crossed the Water of Leith here. This explains the steep narrow roads which are such a challenge to our cars! It helps to keep the surrounding area relatively peaceful despite its proximity to the centre of the City of Edinburgh, and is a delightful green escape for a mindful walk.

Hi, I'm Seonaid, and I share my home on the shores of Loch Ness deep in the Scottish Highlands with my husband, my son and a couple of dogs. I love art which is here now and gone tomorrow...like food and nature...but also have a passion for vintage and the ancient past! Nature is my favourite muse, with her wild ever shifting seasons. I have been using and teaching mindfulness and relaxation for over 12 years, and have yet to become any sort of expert :-) I'm a Psychotherapist and Cancer Support Specialist in Maggies Highlands
View all posts by greenmackenzie →
This entry was posted in ancient sites, green walks, mindfulness and tagged Colinton, Edinburgh, nature, pentland hills, photo, river, scotland, travel. Bookmark the permalink.