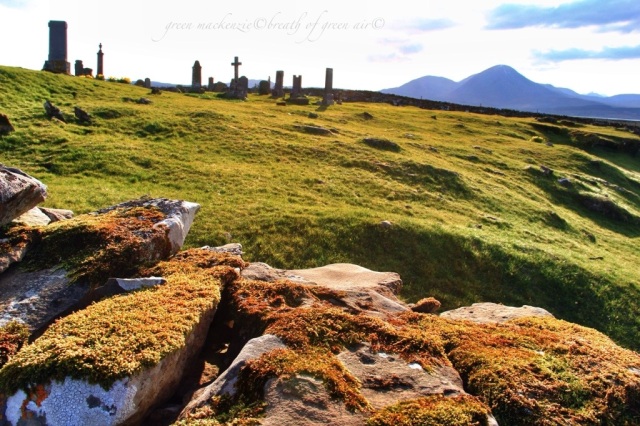 Lying on the South East coast of Skye is a rippled green carpet, lying in soft folds over deep layers of history stretching back at least 7,000 years. Beneath the lush green grass lie remains of human activities, whispering in half obscured lines and echoes, now given over almost entirely to the dead. The green mound enclosed in lichen covered stones, is an ancient burial mound, and it sits on top and around the faded remains of a C7th Celtic Church. This ancient Kirk was placed on an even older burial site, which is flanked by a huge Mesolithic shell midden. It seems this site has drawn people to its natural beauty and peace ever since they arrived on these shores. Looking at the vibrant mossy mound I was reminded of a giant sleeping dragon, curled within the stones and rocks, with just it’s huge stone claws peeping out under the ancient stone boundary. 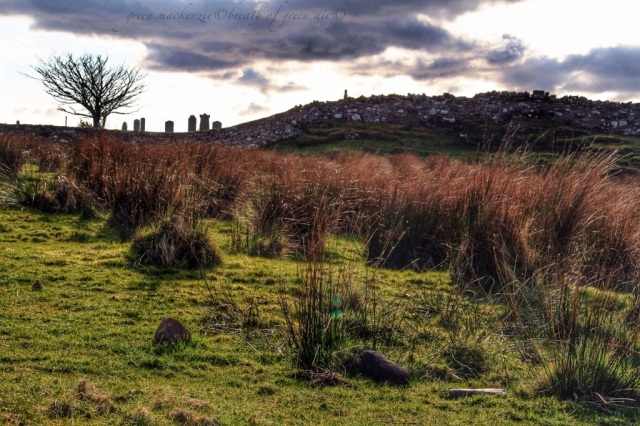 Walking away from this enchanting mound, the view back was dramatically lit by low sun and stray clouds. The newer ancient graves can be seen to the left, where they stand looking out across the waves towards Applecross, Jura and Pabay, while those more ancient have long since crumbled down towards the earth and lie now re absorbed beneath the grass within the body of the dragon. 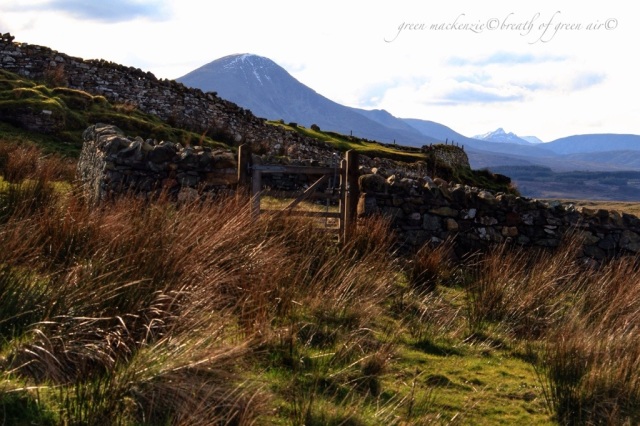 At the older seaward end of the walled mound, just beyond the ancient shell debris, lies a wooden gate leading into a stone enclosure. 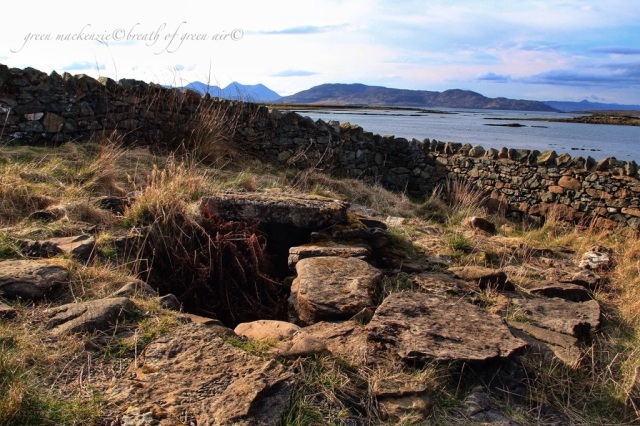 In the heart of this space lies a healing well, with a history of at least 1,300 years, but probably stretching back even further into the prechristian past. It’s waters were claimed as a cure for asthma, eye complaints and soft bones, and prayers and curses could be granted at its edge. Still gushing strongly from the earth, it flows into a stone chamber, partially covered by curiously marked stones. 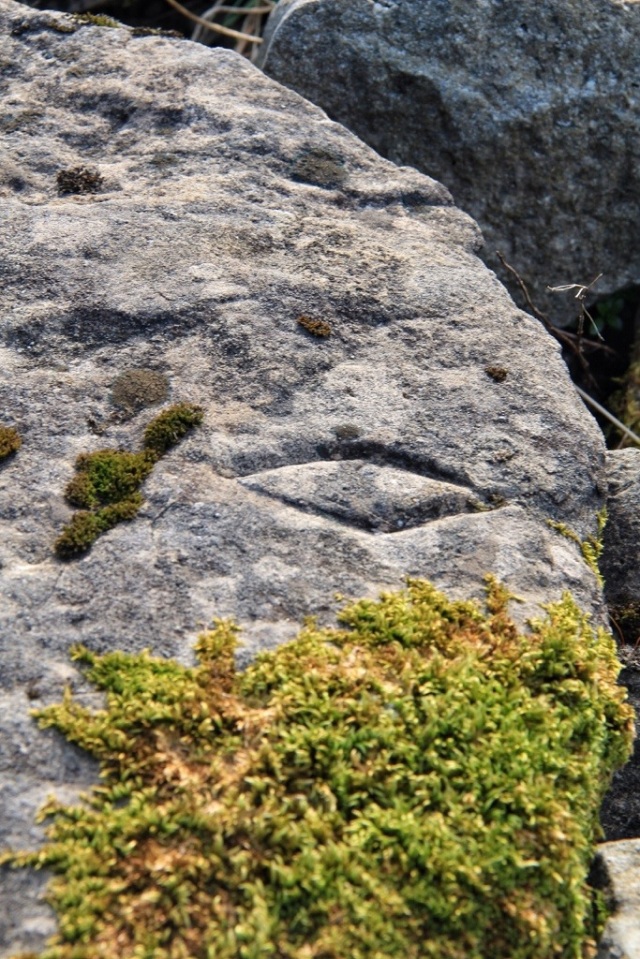 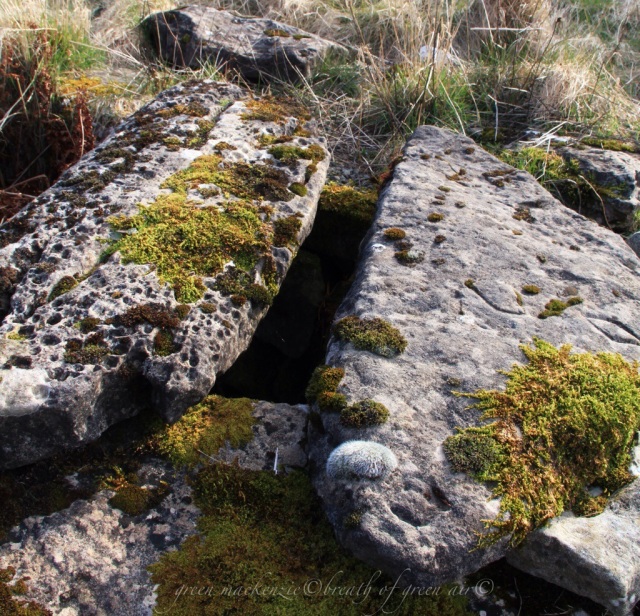 Little hollow cups and faces swim in and out of view as the sun casts ever longer shadows, and the stillness and mystery of the deep earth meets us in the crystal waters of the well. An eye, black and moist gazes up from the depths, the earth dragon looks out on the world as we look inwards. The sound of the flowing water leads us out of the enclosure, following a trail of shining white stones scattered in the healing stream. 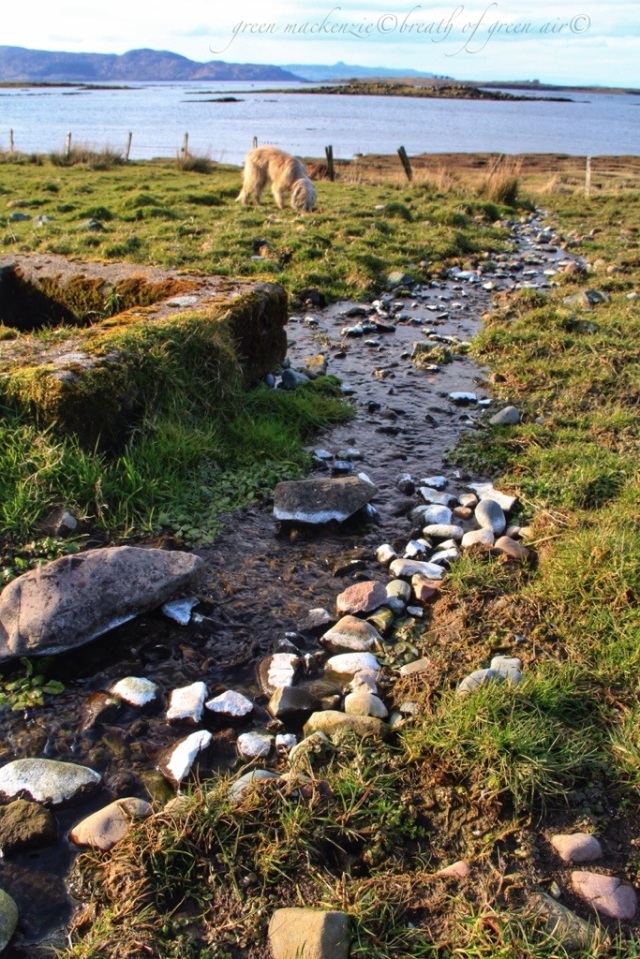 A trail of magic marked by the glistening white pebbles, bejewelling the blue ribbon flowing through the green moss out towards the ocean beyond. Water herbs grow fresh and bright in the healing waters, and a basin fills with water topped by glittering golden sun stars. Here would be the place to take the cure, to drink the waters, but afterwards the well head should be circled three times, sunwise, and a natural offering left, all to appease the ancient earth dragon and his glittering eye, or so they say. 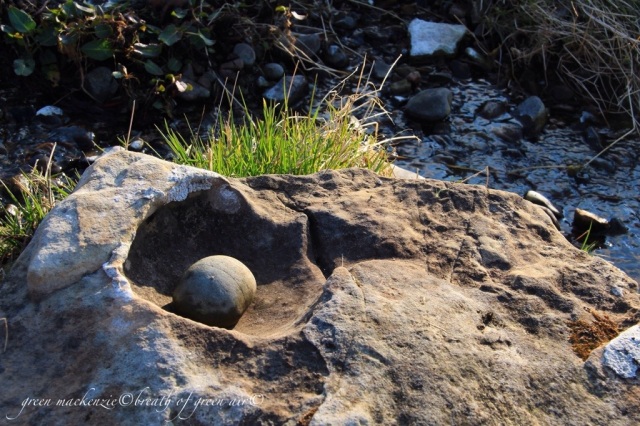 Even closer to the shore, where the sweet clear waters pour over salty tidal stones and earth, there is an ancient wishing stone, a bullaun. Turning the stone within the hollow you could seek a blessing or a curse, depending on the direction you turned the stone. Round as a dragons egg, new directions and fates were birthed by it’s turning. Here at the edge of an island, on the edge of the sea, all was possible if you dreamed hard enough, and the dragon heard.
No wonder the Celtic Saint Maelrubha chose this as his holy place to preach on Skye, hanging his bell from the branches of the ash tree near the well. He travelled by ferry from Applecross so frequently that the place became known as the ferry of Maelrubha. Nowadays the dead are still laid to rest here beneath this soft green turf, with beautiful views across the waves. Countless layers of humanity resting peacefully, returning to the earth from which they came. It’s a beautiful place to reflect on our mortality, and our place within the cycles of life, and to dream of change.

Hi, I'm Seonaid, and I share my home on the shores of Loch Ness deep in the Scottish Highlands with my husband, my son and a couple of dogs. I love art which is here now and gone tomorrow...like food and nature...but also have a passion for vintage and the ancient past! Nature is my favourite muse, with her wild ever shifting seasons. I have been using and teaching mindfulness and relaxation for over 12 years, and have yet to become any sort of expert :-) I'm a Psychotherapist and Cancer Support Specialist in Maggies Highlands
View all posts by greenmackenzie →
This entry was posted in ancient history, ancient sites, Celtic, change, elemental, mindfulness, mythology, nature photo, photos, relaxation, spiritual, travel and tagged Celtic, healing wells, history, magic, photography, Saint Maelrubha, Skye, tobar ashaig, travel. Bookmark the permalink.

51 Responses to Earth Dragon of Ashaig