Yesterday I was restless and yearning for light, so I headed off to the coast. The sea usually soothes me, but instead of being drawn to the waves, it was the rocks who were calling. They were full of interesting shapes and tales, of unfinished deeds. Most were still waiting for her to come back and finish the job. 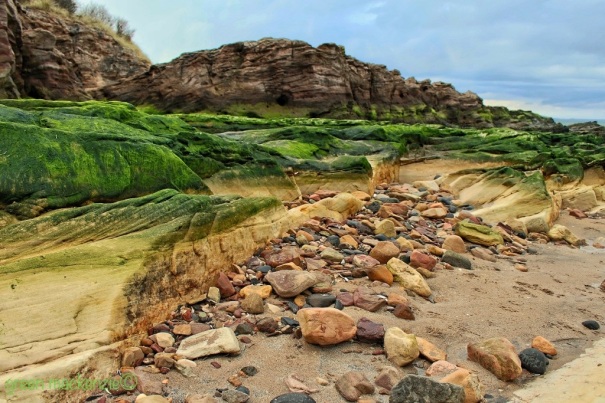 The whole process of rock to sand was spread out in front of me. The wind, the frost and the sea between them were splitting and grinding the earths stone body. From immovable rock to dusty sand in the blink of a century or two. Within this cycle of change what a dazzling array of colours and shapes were thrown out onto the beach in a flagrant attempt to show off. And it worked, I was captivated, and the oceans song fell on deaf ears. 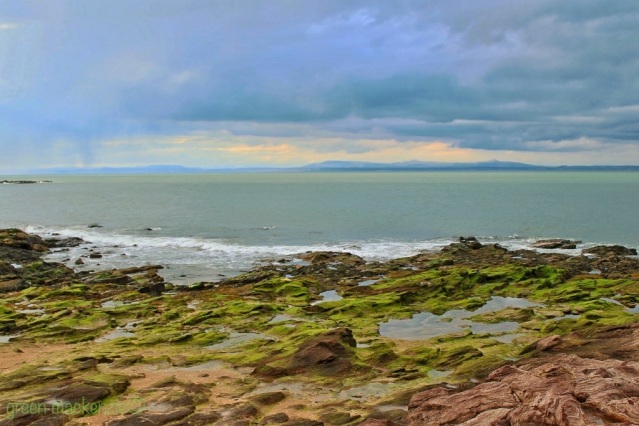 These liquid rocks claimed they had recently spilled onto the shore, but their green blanket of growth, whispered of millennia. 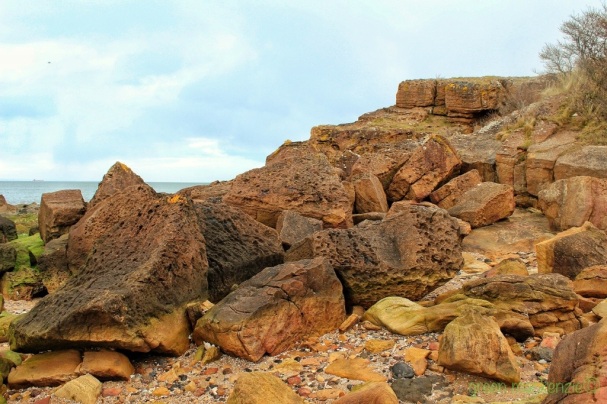 These sandstone cubes spoke of being crumbled in huge and powerful fingers, part of a new and exciting recipe she had been trying. But she had got distracted and forgotten about them, and they felt abandoned.

Parts of the exposed rock beds had been waiting so long, that the sea had soothed them to sleep with lullabies, and mother nature had tucked them in under a soft green rug. 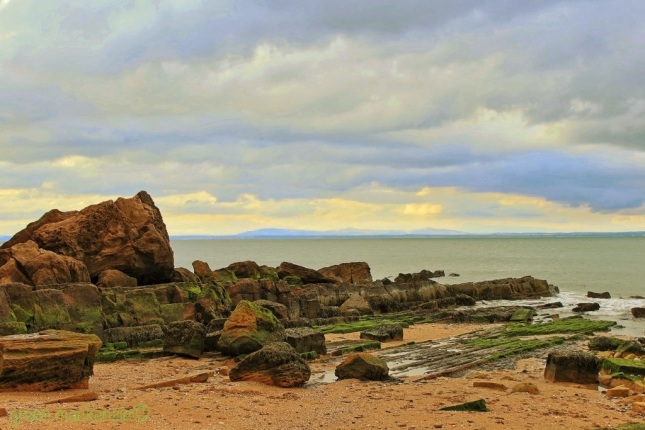 A set of stone tram-lines rolled into the ocean, part of a big plan which had long been abandoned, plagued by disputes and engineering errors.

Some rocks had forgotten the plan, and had happily adapted, producing stunning and dramatic perches for seabirds. Licked by the tides cycles and with breathtaking views across the Firth, it’s no wonder they were content with their place on the earth. I sat for a while and looked across the restless waves, feeling the firm and satisfied rocks beneath me, and letting a contented stillness fill me. 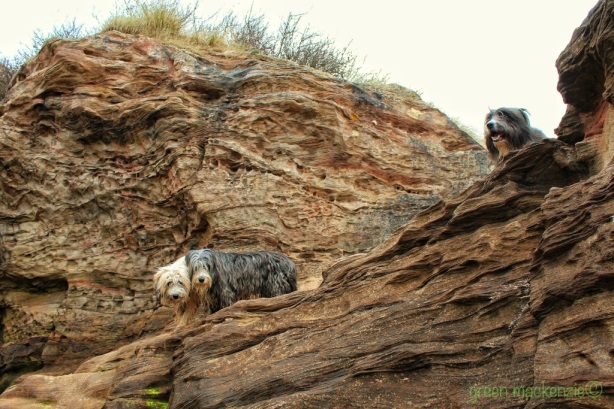 But the dogs were not so relaxed, and they called impatiently from the weathered rugged cliff above. The exposed swirls and layers smoothly wove a tale of the unseen motion of earth hidden beneath our feet. This rock face was in no hurry and gave up only tiny fragments of sand to the insistent wind. She hoped her looks would survive the passage of time.

I took one last look back, hearing the voice of a holey rock. Hundreds of smooth passages led into her mysterious depths, and a chalice of seawater lay at her feet. I promised I’d come back soon to hear her story. 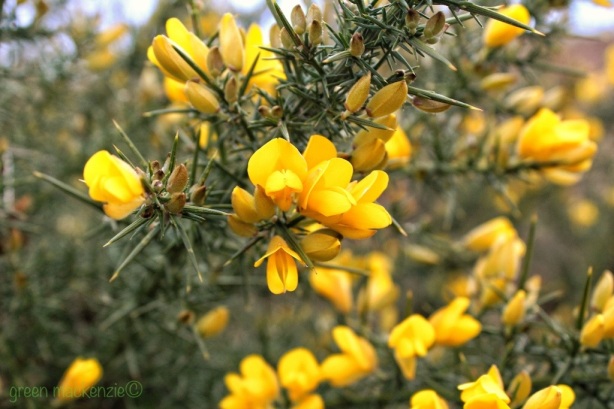 All along the top of the cliff path the gorse had come into bloom, filling the air with a hint of coconuts, and boldly proclaiming that Spring was here. The rocks were hidden by mother natures soil and plant blanket, but if you listen carefully you can hear the rocks whispering far below. They have stories of patience and endurance to tell those with the ears to hear.

Hi, I'm Seonaid, and I share my home on the shores of Loch Ness deep in the Scottish Highlands with my husband, my son and a couple of dogs. I love art which is here now and gone tomorrow...like food and nature...but also have a passion for vintage and the ancient past! Nature is my favourite muse, with her wild ever shifting seasons. I have been using and teaching mindfulness and relaxation for over 12 years, and have yet to become any sort of expert :-) I'm a Psychotherapist and Cancer Support Specialist in Maggies Highlands
View all posts by greenmackenzie →
This entry was posted in change, elemental, mindfulness, philosophy, photos, relaxation, spiritual, stuckness, thoughts and tagged change, coastal walk, mindfulness, nature, philosophy, photography, process, relaxation, spiritual, stories. Bookmark the permalink.