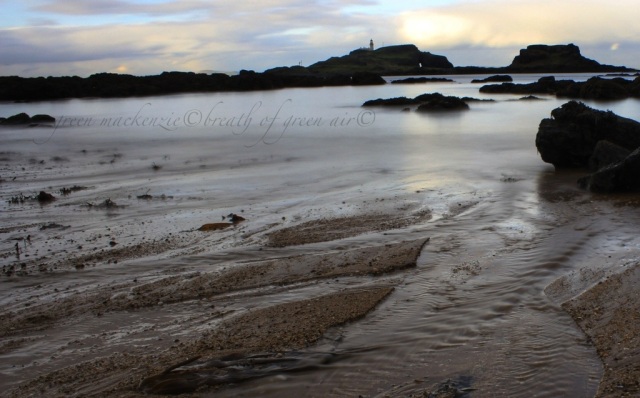 Sitting, in the impossibly romantic rise and fall of the tidal waters of the Firth of Forth, is a small chain of rocky islands. Easily seen, but hard to reach, each evokes its own mystery and tales from times long past. Almost all the islands are linked with Saints from the seventh century, and even older holy sites which reach yet further back into the mists of time. Fidra is no exception, accompanied by its two faithful dog rocks to the North and South, it’s Norse name means Isle of Feathers, or Feathered Isle. Perhaps feather cloaked Druids inhabited the rock, certainly monks lived here in a monastery which was used to nurse plague victims. There was also a Chapel which was a pilgrimage site for nuns, and a miraculous fresh water well. Even further back through time there was an iron age stronghold here, followed later by a now ruined Medieval castle.
It draws the eye and the imagination even today, rising from the misty restless waters, and Robert Louis Stevenson was inspired by Fidra to write Treasure Island. Certainly the caves hidden among these rocky isles were well used by pirates and smugglers, long after the monks had fled in the wake of Viking raids.
Nowadays the islands have been returned to the birds, and Fidra like most of the others is a protected sites for breeding pairs of Puffins, Guillemots and Razorbills. A lighthouse warns passing ships to steer well clear of the treacherous rocks, which run away to the South West, from the South Dog, littered with ancient wrecks. The stories press through in unending layers and the mysterious island beckons, feeding the imagination and posing patiently for photos taken from the golden sands of Yellowcraig beach. Once again it’s rocks are scattered with feathers and lapped by the waves of silence which flow from this once sacred spot.

Hi, I'm Seonaid, and I share my home on the shores of Loch Ness deep in the Scottish Highlands with my husband, my son and a couple of dogs. I love art which is here now and gone tomorrow...like food and nature...but also have a passion for vintage and the ancient past! Nature is my favourite muse, with her wild ever shifting seasons. I have been using and teaching mindfulness and relaxation for over 12 years, and have yet to become any sort of expert :-) I'm a Psychotherapist and Cancer Support Specialist in Maggies Highlands
View all posts by greenmackenzie →
This entry was posted in ancient history, ancient sites, art, Edinburgh, elemental, history, mindfulness, nature photo, photos, spiritual, travel and tagged ancient, art, Fidra, Firth of Forth, history, nature, photography, sacred, scotland. Bookmark the permalink.