This wonderful characterful unicorn is part of a fairytale Scottish relic commissioned by King James V. It has stood in the central courtyard of Linlithgow Palace since 1538, just one year after the young Scottish King married the sophisticated and beautiful French Mary of Guise. 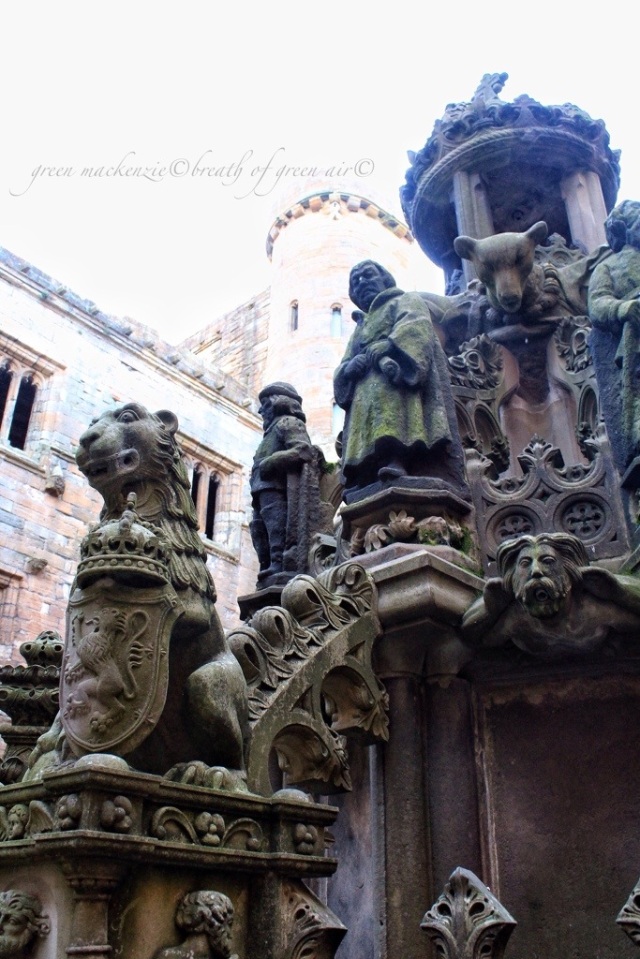 It is covered in a wild and fantastical variety of mystical and mythical beasts, all linked to Scottish symbolism. Built with love and magic, lions and bears vie for space with mermaids and unicorns, and sweep you off into tales as old as the hills. 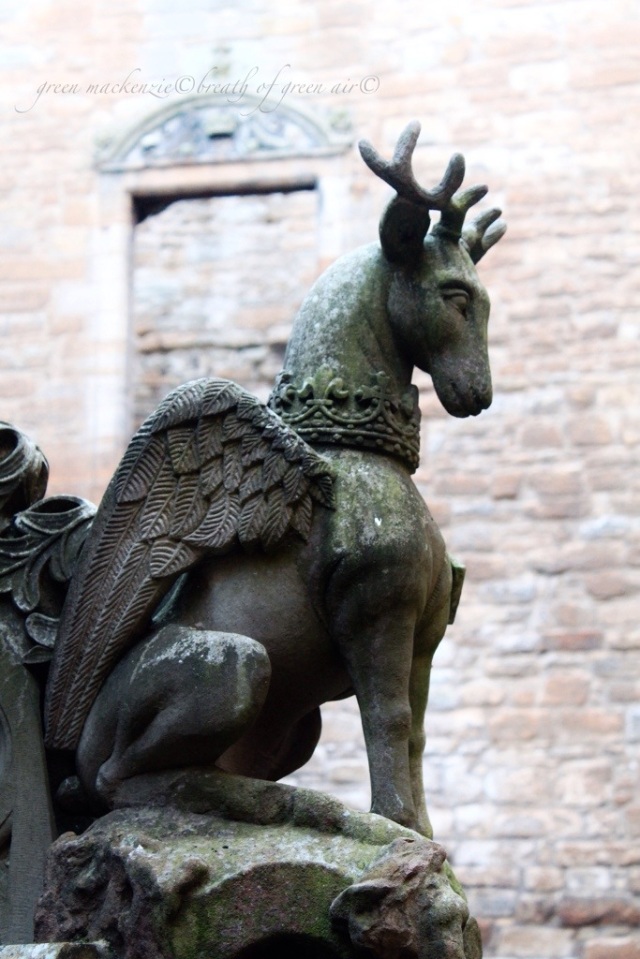 There is such vitality in these old stone relics that it’s easy to imagine them getting up and walking off across the cobbled square. 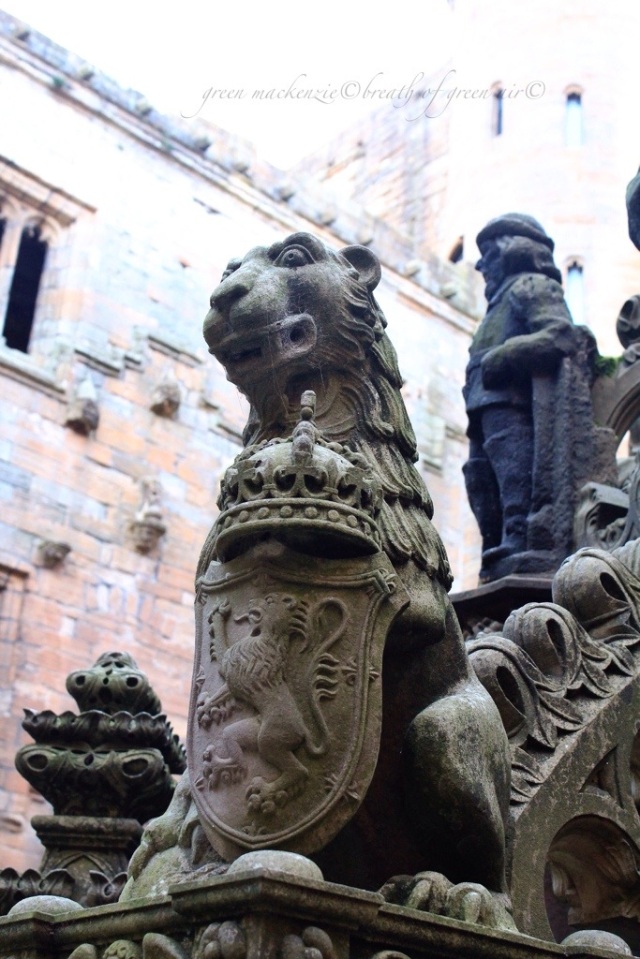 Despite the cobwebs in his mouth, it was only at the last full moon that this old lion padded across the grass down to the loch outside the palace walls, for a drink of moon filled water.

And only last month this feisty deer caught the sun in her horns and rode through the worlds edges and on into the otherworld, which lies just beneath our feet, a heartbeat away. She has secrets to share, but you have to know how to ask.

So fierce that he has to be chained, the unicorn is restless, longing to stretch his legs and pound his hooves across the green land of Scotland, ancient Albion, whose soul he holds.

And the deer who lights the path through the dark leafy Forrest is waiting to open the way to those who seek. Resting for now among the stone throng of creatures, it would take just one whispered word in his ear and a little drop of magic and desire. Your adventure into the forest of mysteries could begin on your next heartbeat. 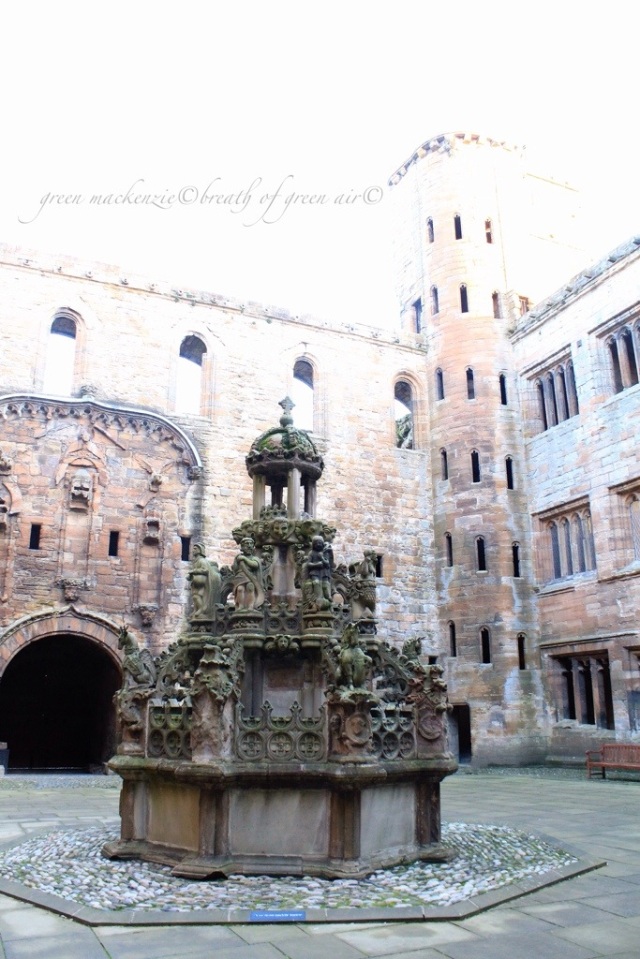 But for now all is quiet, and this ancient stone relic sits peacefully holding its tales of wonder and magic safely in the centre of the old royal palace. Seat of the Stewart kings, Queen Margaret gave birth to her son, James V, here within these walls on 10 April 1512. He brought his beautiful French wife to live here and built her this fairytale fountain one year later. A love filled anniversary gift fit for a Queen, still beautiful nearly five hundred years later!

Hi, I'm Seonaid, and I share my home on the shores of Loch Ness deep in the Scottish Highlands with my husband, my son and a couple of dogs. I love art which is here now and gone tomorrow...like food and nature...but also have a passion for vintage and the ancient past! Nature is my favourite muse, with her wild ever shifting seasons. I have been using and teaching mindfulness and relaxation for over 12 years, and have yet to become any sort of expert :-) I'm a Psychotherapist and Cancer Support Specialist in Maggies Highlands
View all posts by greenmackenzie →
This entry was posted in history, mythology, weekly photo challenge and tagged fairytale, history, love, magic, myths, photography, postaday, royalty, scotland, travel. Bookmark the permalink.